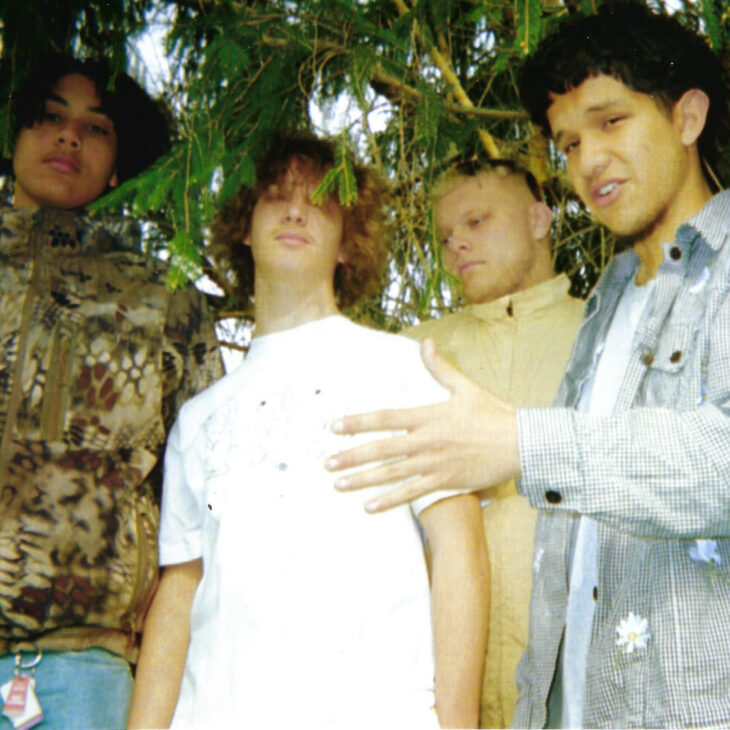 『I received a mail from ‘Bums’, a youth collective of mainly high school students in Richmond/US, with a promotion for their debut song ‘Holy Smoke’. When I opened the soundcloud link to listen to it, my ears were occupied with a song filled with the original “FUN” and “WONDER” of origin of HIPHOP. As like JB’s 3rd + Jurassic 5…..it’s so old school. I was interested in, so I did a mail interview with Xdam, the producer behind the special sound of Bums.』

At first, this is the mail from Bums.

Hours and hours were spent in a garage throwing shit at a wall seeing if it sticks. Bums is a group of high school kids with dreams of leaving Richmond, Indiana and the “normal” lives we’re dreading. Our debut album “Avery” began as a soundtrack to a movie script written by group member Kellan Grae, but quickly evolved into a new entity, being led by it’s first single “Holy Smokes”.

The first track to seep out of the project is bombastic in its essence. It balances flossy raps about teenage priorities, marijuana, and the overall goals of the group. The production is handled by one of the core members, Adam Mathews (AKA Xdam). The piercing drums met with the chopped up vocal samples creates the perfect canvas for Jay Frye, Vaw Golde, and Kevin Calderon to spit their hearts out in between the silky chorus intoned by Kid Menti. The band keeps the listener on their toes with the quick swapping of spotlight from member to member. The song carries the energy of the “Seeing Sounds” album by N.E.R.D. while oozing the braggadocio of a Big L track.

The inspirations that shape Bums as a group extends all over the place as the 7 members all have different influences that create their identity. There is no Indiana music scene, it’s practically a barren wasteland. Bums IS Richmond’s musicscene. Holy Smokes is a culmination of our generations best art spun through young minds and put on display for all to see.

Look out for upcoming projects and the future of Bums.

I serched about them, so I looked them up and found one video posted on each TW/IG.

It had the genes of Off Future and Brockhampton, but with a characterful flow and a high quality track and video concept. I was surprised that Holy Smoke came out after this album.

I followed Bums member’s IG accounts. Xdam follow back & I ask something about “Bums”. It be interesting. Let’s check.

Interview to Xdam(Producer of Bums):

HARVEST: I listened y’all shit. I’m not good at English & I can’t understand all words. But sounds are so fresh. Are y’all just high school mate? Most of y’all 18y.o?

Xdam: Thank you So much! and yes for the most part we are in high school. Most of us are about to graduate though. Our youngest member is 17 and our oldest is 22, the rest of us are around 18-19. And we just wanted to make the most youthful/rebellious sounding song possible.

X: Bums was founded November 11th, 2017 when we were all in high school. Our first project came out summer of 2019 and was called “premature”. it was our first ever attempt to make an ep or album as a group. We spent most nights staying at my house working on music all night just trying to get better, and i’m not gonna lie, we were not very good at this time but we did learn a lot on how to make better music just by experiencing it. next we had a single called make amends which was very noticeable an improvement from anything we had done before. In November 2018 we went to a Brockhampton concert which completely changed our lives and on the car ride home we even planned on how to make the next project which would end up being “Avery”. After working very hard for about 2 years we deceived to delete all music on streaming services to prepare for Avery. Bums stands for making the most out of nothing. So many sacrifices were made pursuing this dream of making music, but no matter what we will always keep doing it no matter how life goes.


H: Your sound are so unique. What type of music influenced you? Who is the leader?

X: Our biggest influence was a mixture of rock music and hip hop music.
And we don’t really have a leader in our group, big important decisions are decided as a group because we feel like we can make the best possible decisions that way.


H: Thank you. Why I surprised “Holy Smoke”. It has old school flavor & funk. All flows are really unique, fresh & original. It feel original art form as like “Old school”. The track is really crazy shit.

X: One of the biggest influences for the track Holy Smokes was probably the producer “Timbaland”. He is a very classic and old school producer in hip hop, and i watch videos of him producing almost every night. I just wanted to try and combine the old, vintage sound of his production with the energetic and aggressive vocals.


H: Is “SMOKEFREEAREA” produced by you?

X: “SMOKEFREEAREA” was produced by me and jackson(vaw golde) and we recorded, mixed, and mastered everything ourselves.


H: When your debut album “Avery” drop? You(bums) write in mail, that project is start from movie’s soundtrack. Is that still soundtrack for movie?

X: And yes we actually have a whole script written out for a short film we were gonna release. We originally planned on releasing 3 short films over 1-3 years, and with each short film we were gonna release a new album to accompany it. About a half a year into making the album we all realized it would be better to just focus on the music itself first and then work on film and movie stuff after. We will most definitely be working on some type of film or movie in the near future. While we were working on the album at first, we would just make songs that would perfectly fit the soundtrack of the movie, and that’s how we found the overall structure and direction of the album.

X: I’d say the favorite movie of bums is “Goodfellas”. We all have a special connection to this movie.

X: We are releasing the rest of the singles and then our album by summer time along with multiple videos to tracks on the album. We also plan on releasing a documentary eventually to show how avery was made as well as merch and a e-magazine.

Thank you Xdam & Bums. Their future will be light. Keep check Bums.